Background to the Community Renewal Programme

Jamaica is the third largest island in the Caribbean with an area of just over 10,000 square km and a population of just over 2.7 million people (approximately 51.2% female and 48.8% male [1]). The country is recognized as a stable democracy but has for decades struggled with a weak economy that has operated with a high debt ratio and consistently low GDP [2]. However, in recent years, the country embarked on a programme of economic reform that has moved the economy into a period of relative stability and towards meaningful debt reduction.

Notwithstanding the socio-economic performance of the country, an underlying problem that has for decades hindered development has been a high rate of violent crime, particularly murder which has gone as high as 63/100,000 (2009).

Crime has had deleterious effects in many vulnerable and volatile communities across Jamaica.

The Government of Jamaica, through the Planning Institute of Jamaica (PlOJ), spearheaded the establishment of the Community Renewal Programme (CRP) in 2011. The CRP was derived from a collaborative process involving consultations with Government Ministries, Departments and Agencies, communities, civil society and International Development Partners. The CRP serves as a holistic programme intervention for long-term stability, well-being and inclusiveness, consistent with the goals of Vision 2030 Jamaica – National Development Plan. 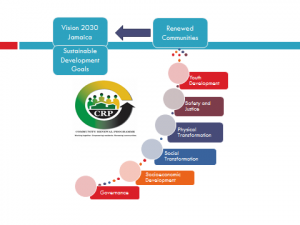 The CRP targets the 100 most volatile and vulnerable communities in five parishes (Kingston, St. Andrew, St. Catherine, Clarendon and St. James that have experienced the highest murder rates over the last ten (10) years.

These communities were ranked as the most volatile and vulnerable communities in Jamaica through the application of an index of vulnerability and volatility developed by a technical team.

To learn more about how CRP conducts its community selection, browse our presentation here. 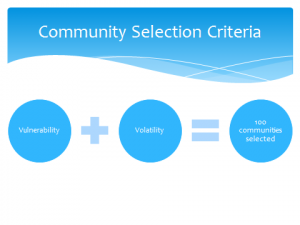 The CRP is coordinated by the PIOJ through the CRP Secretariat, which was established in 2011. The Secretariat seeks to ensure the efficient and effective implementation of the CRP by the various implementing agencies through the following six strategic objectives 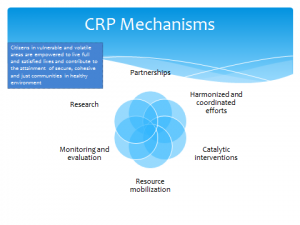